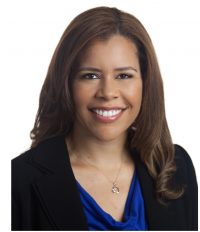 Eriade Williams joined ACG March 2018. She leverages her many years as a staffer in the House Democratic Caucus with her additional diverse work experience, to advise a wide range of clients at ACG. She mainly focuses on those in the defense, transportation, and energy spaces, but spends significant time on those in the fields of technology, entertainment, and healthcare as well.

Prior to joining ACG, Eriade was the Deputy Chief of Staff and Legislative Director for Congressman Robert Brady (D-PA), who represented much of the City of Philadelphia. In addition to supervising the legislative staff, she handled the Armed Services Committee and foreign affairs work, so traveled extensively overseas and to several domestic U.S. military bases in that capacity. However, throughout her seven years there, Eriade was responsible for healthcare, transportation, judiciary, financial services, housing, and immigration policy, among other issues.

Eriade got her start on Capitol Hill as the Press Secretary and the primary spokesperson for Congressman Albert Wynn (D-MD), who was a Senior Member of the Energy and Commerce Committee and the Congressional Black Caucus (CBC).

She is admitted to practice law in the state of Maryland and has worked as an Appointed Attorney, representing indigent clients in felony and misdemeanor cases at their bail hearings. Eriade belongs to numerous civic organizations and received her bachelor’s degree from Howard University, master’s degree from Georgia State University and juris doctorate from American University, Washington College of Law.